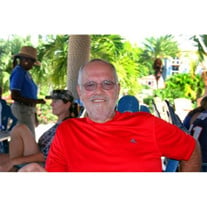 A celebration of Russell Perkins life will be held at 1:00 P.M. Wednesday, April 8, 2015, at the Schuchert-Lentz Funeral Home. A memorial visitation will be held Tuesday, from 5:00 PM until 7:00 PM at the Schuchert-Lentz Funeral Home. In lieu of flowers, memorials may be given in Russell's name. Russell E. Perkins, the son of Eldon and Henrietta (Fritz) Perkins, was born on April 27, 1953, in Sioux Rapids, Iowa. On December 31, 1997, Russell was united in marriage with LaNee Simons in Spirit Lake. Russell worked at DEMCO for many years, retiring in 2013. He enjoyed golfing, boating, spending time with his family and having coffee with his friends. Left to cherish Russell's memory is his wife of 17 years, LaNee; three daughters, Katherine (John) Steen of Merrill, Mary Perkins and Mikayla Perkins both of Dallas, Texas; six grandchildren, Franky, Kiana, Kyli, Kayli, Kennidy and Olyvia; and two brothers, Gene Perkins of Britt and John Perkins of Dakota Dunes, SD. He was preceded in death by his parents and a sister, Judy Streufert.

The family of Russell Perkins created this Life Tributes page to make it easy to share your memories.

Send flowers to the Perkins family.