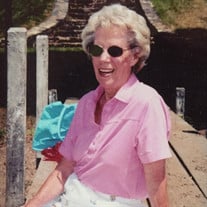 There will be a visitation for Sally Shirley Parks of Okoboji on Friday, October 14 from 5:00 pm to 7:00 pm at Schuchert-Lentz Funeral Home, 2317 32nd St, Spirit Lake IA 51360 (712) 336-8471. A family service will be held at a later date. Sally was born in Omaha in the middle of the Roaring 20’s and she never stopped enjoying life to the fullest. One of her favorite memories of her father Paul Vincent Shirley was his riding a horse through the dining room. Her mother Mary “Mom” Fuller Shirley was a best friend and they enjoyed many adventures. Sally was the oldest of three children and the families of her brother Paul and wife Clo Ann Langdon, and of her sister Mary Landen and husband Mickey, were an important part of her life. Sally attended Dundee School and Brownell-Talbot School in Omaha, Gulf Park College in Mississippi, and graduated from the University of Nebraska as a Kappa Alpha Theta. She was an AKSARBEN Princess in 1947, a member of the Junior League of Omaha, and a sixty-year member in the P.E.O. She also was a long-time member of the Okoboji Yacht Club, Pearson Lakes Art Center, and OPA. Sally was among the founding members of the local Hospital Auxiliary in 1960, and served as president, as well as serving a term on the Hospital’s Advisory Board. She continued to be active in many of the Hospital’s volunteer services and it was only a few weeks ago that she ended her 56 years of service. Sally married Charles Holmes in 1948 and they had two sons, Chuck and Tim. She and her husband moved to Okoboji in 1957 and were divorced in 1958. A few years later she married Leo Parks Sr. and they have three children: Mary, John and Tom. She was the ‘first lady” of Okoboji during Leo’s 19 years as mayor. Sally also was fortunate to have Leo’s three children as part of her family and all as close friends: Shari Parks Hruby, Janie Parks Wittrock, and Butch Parks. Sally has eleven grandchildren: Alonso, Sebastien and Dominic Holmes (Chuck and Rynn); Lillian and Oliver Holmes (Tim and Meg): John (JT) and Jacob Mix (Mary); Katie and Peyton Parks (John and Melanie); and Sarah and Rachel Parks (Tom and Deb). Sally fell in love with Okoboji at a young age and her family is forever grateful that she chose to make it her home. She had many close friends in the lakes area and was always ready for a round of golf, to meet for coffee, go out for dinner, or help a friend. Gifts in memory of Sally can be made to the Lakes Regional Healthcare Volunteers, in care of the hospital; or to Brownell Talbot School, 400 North Happy Hollow Boulevard, Omaha NE 68132 (402) 556-3772.

The family of Sally Parks created this Life Tributes page to make it easy to share your memories.

There will be a visitation for Sally Shirley Parks of Okoboji...

Send flowers to the Parks family.