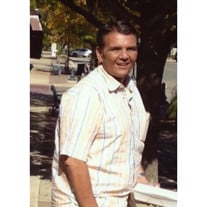 Scott Alan Harms, son of Roger and Mary (Bodum) Harms was born in San Jose, California, on October 26, 1964. He passed away on June 17, 2015, at the Lake Park Care Center from complications of liver failure. Scott was 50 years old. Scott grew up and graduated from Estherville High School, then furthered his education at Iowa Lakes Community College and Mankato State University, graduating with a BS degree in accounting. He received his CPA certification in 2000. He was employed by various companies, including Sathers in Round Lake, Minnesota, Campbell, Higgins and Associates in Spencer, Iowa, Ringsdorf Accounting in Estherville, Iowa, and Clay County Rural Water in Spencer, Iowa. He later started his own business, Liberty Tax, in Estherville, Iowa. Scott married Cherie Streufert in 1993, and they were blessed with one daughter, Haley Ann, born in 2003. The family enjoyed the activities offered in the lakes area, particularly boating with friends. They were members of Immanuel Lutheran Church in Spirit Lake. Scott and Cherie ended their marriage in 2010. Scott enjoyed participating in sports while in high school, was an avid skier and loved spending time in the sun. He was rarely seen without a dark tan. He was a big Denver Broncos fan and never watched them play without wearing his orange and blue! Scott Is survived by his father and step-mother, Roger and Donna Harms of Okoboji, IA; daughter, Haley Ann Harms of Arnolds Park, IA; brother, Ross (Tami) Harms of Chilton, WI; nephews, Brandon and Kyle Harms of Chilton, WI; Step-brothers, Bruce (Kristin) Brown of Valley Springs, SD; Daniel (Joanna) Brown of Bloomington, MN, Terry (Julie) Brown and daughter, Rachel of Fridley, MN; step-grandmother, Gladys Zweifel of Spirit Lake, IA; and very special long time loyal friends, Paul (Karen) Rolhf of Spirit Lake, IA. He was preceded in death by his mother, Mary Goodwin; and his step-father, Larry Goodwin. A memorial service will be held at 11:00 A.M. Wednesday, June 24, 2015, at the Schuchert-Lentz Funeral Home. Visitation will be held Tuesday, from 4:00 P.M. until 6:00 P.M. at the Schuchert-Lentz Funeral Home. The Schuchert-Lentz Funeral Home is in charge of the arrangements.

The family of Scott Alan Harms created this Life Tributes page to make it easy to share your memories.

Send flowers to the Harms family.