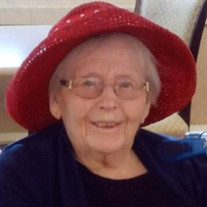 Not sure what to send?

Shirley A. Goldtrap, 93, of Milford passed away on Sunday, April 24, 2022, at the Accura Healthcare Center in Milford. A private family burial will be held in the West Bend Cemetery in West Bend, IA. A Celebration of Life will be held June 11, from Noon to 3:00 pm at Park Inn and Suites in West Bend, IA. Shirley was born March 1, 1929, in West Bend, Iowa to Roy and Esther (Jurgens) Forsythe. After her mother’s death in 1930 she was raised by her grandparents Awalt and Lydia Jurgens. In 1947 Shirley graduated from West Bend High School. After high school she attended Americana University of Beauty in Des Moines and graduated in 1948. November 26, 1951, Shirley married John Goldtrap in West Bend. Shirley owned and operated a beauty shop in West Bend until 1969. The couple moved to rural Terril and returned to West Bend for a short time and then moved back to the farm. After John’s death in 1983 Shirley moved to Milford. From 1986 to her retirement in 2003 Shirley worked as a caregiver and housekeeper in the lakes area. In her free time, you could find Shirley gardening, sewing, or doing crafts. She also enjoyed bowling and snowmobiling. At Christmas time one of her favorite things to do was making gingerbread houses with the grandchildren. Shirley was a Member of the American Legion Auxiliary since 1950. Shirley is preceded in death by her husband, John, parents Roy and Esther Forsythe and stepmother Jean Forsythe, siblings, Roy, Robert (Beverly), James (Carol), Raymond, George Forsythe and grandson, Jeffery Laubenthal. Left to cherish her memory are her children Sherrie (Michael) Laubenthal, Spencer; Brian (Connie) Goldtrap, Spirit Lake; Grandchildren, Ryan (Melany) Laubenthal, Milford, IA; Rachel (Nathan) Cummings, West Des Moines; and Brett (Emily) Goldtrap, Phoenix, AZ; Great grandson Thomas Laubenthal. Sisters George Ann Hadley and Colleen Kollasch. Sister-in-laws Donna Forsythe, and Carol Forsythe, and many nieces and nephews. In lieu of flowers a donation in her memory may be made to the Milford American Legion Auxiliary, Unit #384. Mail to: LaVonne Siemers, 1306 Terrance Park Blvd., Milford, IA 51351 or Sherrie Laubenthal, 1403 8th Ave SW, Spencer, IA 51301

Shirley A. Goldtrap, 93, of Milford passed away on Sunday, April 24, 2022, at the Accura Healthcare Center in Milford. A private family burial will be held in the West Bend Cemetery in West Bend, IA. A Celebration of Life will be held June... View Obituary & Service Information

The family of Shirley A. Goldtrap created this Life Tributes page to make it easy to share your memories.

Shirley A. Goldtrap, 93, of Milford passed away on Sunday, April...