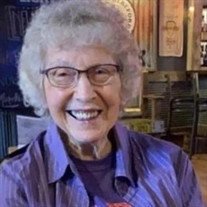 Shirley Hamann of Milford, Iowa passed away on September 10, 2021. Services will be held at the following times: Friday, September 17th - visitation, 4 to 7 pm at the Schuchert-Lentz Funeral Home in Spirit Lake, IA. Saturday, September 18th - funeral service, which will be live-streamed on the church’s Facebook page will be at 10 am with reception following at the United Methodist Church in Spirit Lake. Sunday, September 19 - burial service, 1 pm at the Buena Vista Memorial Park Cemetery in Storm Lake. Shirley Mae Hamann, the daughter of John Alden and Edna (Olsen) Miller, was born on August 2, 1930 in Newell, Iowa. She graduated from Storm Lake High School in 1948. received her Bachelor of Arts degree from Buena Vista College in 1952. On July 26, 1953, Shirley was united in marriage with Wallace Hamann at the Baptist Church in Storm Lake. In 1952, she began her career teaching music at Lake Township Consolidated School, and taught for 20 years, retiring from Galva in 1972. From 1955 to 1993, Shirley helped Wally on the farm north of Galva. She and Wally were active members of the Galva United Methodist Church, where she was active in choir, ladies’ circle, and children’s programs, and the neighborhood card club. Shirley and Wally retired to West Okoboji in 1993, where she worked at APAC in Spencer as a licensed insurance agent. Shirley and Wally were active members of the Spirit Lake United Methodist Church, and she sang in the church choir for more than 27 years. Shirley was a 20-year breast cancer survivor and participated in events like the local American Cancer Society Relay for Life. She enjoyed playing 500 and other card games and working the daily crossword puzzle in the paper. She loved baking, gardening, and watching television game shows, mysteries, and Lawrence Welk. She played the French horn, piano, guitar, and autoharp, and was an incredible singer. She loved God, loved being with people, and always put family first. Shirley spent her final days under the wonderful care of St. Croix Hospice at Sioux City’s Sunrise Retirement Community. Left to cherish Shirley’s memory are her children, Pamela (Tom) Wolthoff of Weatherford, TX, Valorie (Dixon) de Lena of Albany, CA, Charles Hamann of Le Mars and Christan (Lisa) Hamann of Fort Worth, TX; nine grandchildren; eight great grandchildren, and a great great grandchild. She was preceded in death by Wally, her parents; brothers Jack and Jim Miller, and sisters Karen Johnson and Joan Cupp.

The family of Shirley Mae Hamann created this Life Tributes page to make it easy to share your memories.

Shirley Hamann of Milford, Iowa passed away on September 10,...

Send flowers to the Hamann family.