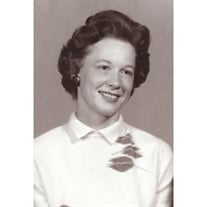 Shirley Lavon Morris passed away on September 3, 2015, in her home surrounded by her family. Memorial services will be held on Saturday, September 12, 2015, at 11:00am at the First Presbyterian Church in Spirit Lake, IA. Visitation will be held one hour prior to the service at the church. Memorials may be given in Shirley's name to the Spirit Lake Public Library. The Schuchert-Lentz Funeral Home is in charge of the arrangements. Shirley was born in Greenville, IL, on May 13, 1931, to Harold and Hattie (Sykes) Smith. She graduated with honors from Garfield-Web High School in 1949. She received her Teacher's Certification in 1950, after attending Iowa State Teacher's College and Buena Vista College. She and Richard were married on May 27, 1950, at the Methodist Church in Webb, IA. They accepted their first teaching positions in Everly, IA. Shirley taught second and third grades in subsequent years. They then moved to Rolfe, where she taught first grade for two years. In 1956, they moved to Spirit Lake, IA, where Shirley became a substitute teacher in the elementary schools in the lakes region. She was also a Sunday school teacher at the First Presbyterian Church. She was an assistant librarian in the Spirit Lake Public Library for many years, worked as an assistant to the principal at Arnolds Park Elementary and worked at Hill Avenue bookstore. She also did volunteer work for the American Cancer Society, American Heart Association and the Census Bureau. Shirley had a lifelong love of books and of music which she loved sharing with her children. She was member of the First Presbyterian Church choir and of Sweet Adeline's singing group. She also enjoyed gardening, watching birds, walking the local trails and traveling with Richard. She was preceded in death by her father; mother; and her sister, Lois. She is survived by her husband of 65 years, Richard; her daughters Marga and Debby; and her sons Jeff and Mike (Lisa); her four grandchildren, Christina (Steve), Kym (Adam), Ben and Megan; her four great-grandchildren, Lauren, Nathan, Isaac and Blake; her brothers, Lloyd (Pat) and Roger (Sharon); and her sister, Joyce; and many nieces and nephews.

Shirley Lavon Morris passed away on September 3, 2015, in her home surrounded by her family. Memorial services will be held on Saturday, September 12, 2015, at 11:00am at the First Presbyterian Church in Spirit Lake, IA. Visitation will be held... View Obituary & Service Information

The family of Shirley Lavon Morris created this Life Tributes page to make it easy to share your memories.

Send flowers to the Morris family.