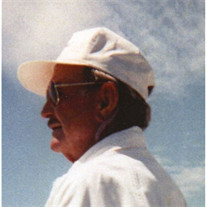 Lloyd "Shorty" Christensen, age 91, of Spirit Lake, formerly of Lohrville, passed away on Wednesday, February 26, 2014, at the Milford Nursing Center. He was born on June 12, 1922, in Ellsworth, Iowa, to Carl and Gladis (Grimes) Christensen. Shorty attended and graduated from Lohrville High School in 1940. On June 22, 1942, Shorty was united in marriage to Kathryn Rossow in Baltimore, Maryland. After the marriage, Shorty entered the service during WW II and Kathryn accompanied him to many of his duty stations. In late 1945, the couple returned to Lohrville, where they made their home and Shorty owned and operated Air-Electric Machine Co. with his three brothers, before retiring in 1986. In 1986, they moved to Spirit Lake, where they made their summer home and during the winters, they lived in Englewood, Florida. Shorty enjoyed spending his spare time golfing, boating, sailing and having Happy Hour with friends and family. Shorty is survived by his four children, Randy and his wife, Mary Jo of Manson, Roger and his wife, Vicky of Arnolds Park, Kathy and her husband, Wally of Bovey, Minnesota, and Ron of Lohrville; twelve grandchildren; nineteen great-grandchildren; and a sister, Betty Lou Eakin of Whidbey Island, Washington. He was preceded in death by his parents; his wife, Kathryn (1993); and four brothers. A Celebration of Shorty's Life will be held at 4:00P.M. Saturday, March 1, 2014, at the Schuchert Funeral Home in Spirit Lake. A graveside service will be held at 11:00A.M. Monday, March 3, 2014, at Evergreen Cemetery in Lohrville. In lieu of flowers, memorials may be given to the Lohrville Fire Department in Shorty's name. The Schuchert Funeral Home is in charge of the arrangements.

Lloyd "Shorty" Christensen, age 91, of Spirit Lake, formerly of Lohrville, passed away on Wednesday, February 26, 2014, at the Milford Nursing Center. He was born on June 12, 1922, in Ellsworth, Iowa, to Carl and Gladis (Grimes) Christensen. Shorty... View Obituary & Service Information

The family of Shorty Christensen created this Life Tributes page to make it easy to share your memories.

Send flowers to the Christensen family.