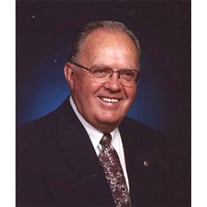 A FUNERAL SERVICE FOR 81 YEAR OLD STAN THOMSEN OF ARNOLDS PARK, FORMERLY OF ESTHERVILLE, WILL BE HELD AT 11:00A.M. TUESDAY, AT THE UNITED METHODIST CHURCH IN SPIRIT LAKE. VISITATION WILL BE HELD MONDAY FROM 5:00P.M. UNTIL 7:00P.M. AT THE SCHUCHERT-LENTZ FUNERAL HOME. BURIAL WILL BE AT EAST SIDE CEMETERY IN ESTHERVILLE. Stanley Kay Thomsen was born in his grandparent's farmhouse near Lake Park, Iowa, on July 10, 1933, to Henry (Joe) and Edna Ehret Thomsen. As he grew up, he and the neighbor boys rode their ponies everywhere together; catching frogs and roasting frog legs over open fires. They loved watching cowboy movies and acting them out. Eventually, he helped his father with farm work, which taught him a lasting work ethic. Stan attended Lake Park schools until 8th grade when the family moved to Estherville, Iowa. During these school years in Estherville, until he graduated in 1950, Stan excelled in music, competitive speech and school plays. He even formed his own dance band, playing the clarinet, and continued it through his studies at Estherville Junior College. After school jobs included delivering the Des Moines Register, clerking at Leuthold and Tibbets Clothing and Estherville Drug Store. Donovan Motor Company and Gamble Robinson Companies also taught him work ethic. When his parents moved to Grand Marais, MN, Stan spent time there as a fishing guide on Lake Superior. He enlisted in the United States Army in 1954. He served as an ordinance instructor at Aberdeen Proving Grounds in Maryland until his honorable discharge in l956. On November 22, l956, Stan married Charlene Smith in the Estherville Methodist Church. The couple made their home in Estherville, where Stan was employed by the Gamble Robinson Company as a territory salesman. He joined Virginia Carolina Chemical Corp. as a territory salesman out of Estherville in 1958. During this time two children, Joel and Jill, were born. In 1960, the family moved to Fort Wayne, Indiana, when Stan was named assistant sales manager with the company. While there, he served as President of Toastmasters. In 1963, the family moved to Remington, Indiana, due to Stan's promotion to sales manager of the Remington operation. In Remington, the family added a new member when daughter, Jean Ann, was born. Transfers with the company moved the family to Estherville in 1966 and to Dubuque in 1968. He was on the board of directors for the Dubuque Arts Council. January 1, 1970, Stan joined Golden Sun Feeds, Inc. and the family moved back to Estherville. In December of 1971, Stan was named plant and sales manager of Grinnell's Golden Sun Feeds Operation. In 1983, he was named Vice President and Eastern Regional Manager of Golden Sun Feeds, and the family moved back to Estherville. In 1987, Stan was named Senior Vice President of Administration and was a member of the management team involved in purchasing Golden Sun Feeds, Inc. He held that position until retiring June 30, 1995. During his business years, Stan served on the National Marketing Committee of the American Feeds Industry Association and was National Committee Chairman. He served on the Iowa Grain and Feed Association board and was it's President. Also during these years, Stan served the Methodist Church on various boards and committees. Stan and Charlene were the Grinnell Methodist Youth Fellowship leaders. He was a member of the Grinnell Country Club Board, serving as it's President, and was on the board of the Grinnell Chamber of Commerce. Stan was a member of the Masonic Lodge and also a Rotarian for many years and proud to be a Paul Harris Fellow. He sat as chairman while on the Marketing Committee of the American Feed Industry Association. He was involved with the Estherville Industrial Development Corporation as a member of the board of Directors. The Republican party was very important to him. In 1989, Stan and Charlene moved to The Harbor on Lake Okoboji where they enjoyed almost twenty years of boating and lake living. While living on the Harbor, Stan served on the Harbor Board, as it was so important to him to help keep the Harbor free of problems. In 1999, the Thomsens found The Villages in Florida to be a wonderful winter home for many years. The summer of 2008, the Thomsens said goodbye to the lake and moved to Emerald Hills Golf Course. Stan especially loved time with his children, grandchildren and great grandchildren. He enjoyed attending their activities and was proud of all of their achievements. After retirement, he enjoyed not only taking them to Disney World in Florida, but showing them all of Florida's history and attractions. Family and friends were very important to Stan, and he looked forward to spending time with them. Stan always enjoyed music and dancing with Charlene, the love of his life. Monday Night Big Band at The Inn was a favorite weekly summer event, as was The Okoboji Summer Theatre. He loved golf, and in earlier years, bowling. Stan's favorite teams were the Hawkeyes and the Vikings. After retirement, the Thomsens owned an antique business, Serendipity. Stan enjoyed searching for antiques, especially Golden Sun memorabilia. Other activities that were high on his list of enjoyment were class reunions, spending time with his golf buddies, and Wednesday morning coffee with the Methodist "Mafia." He was preceded in death by his parents, Joe and Edna. He is survived by his wife of 58 years, son Joel (Geraldyne Shumaker and son Blake) of Sioux Falls, daughters Jill (Tim) Mitchell of Rapid City, SD and Jean Ann (John) Myhre of the Lakes Area. He adored his 8 grand children: Amy Thomsen (Sean Skrondahl), Abby (Adam) Viereck, and Alissa Thomsen (fiancé Luke Sendelbach), Chelsea (Jason) Larkin, Jordin (Brad) Edwards, all of Sioux Falls, Courtney Mueller of Minneapolis, Emma and Olin Myhre of the Lakes Area. Also surviving him are his 4 great grand children: Ali Jo and Aden Viereck, Bentley Larkin, and Ariana Thomsen-Skrondahl, all of Sioux Falls.

A FUNERAL SERVICE FOR 81 YEAR OLD STAN THOMSEN OF ARNOLDS PARK, FORMERLY OF ESTHERVILLE, WILL BE HELD AT 11:00A.M. TUESDAY, AT THE UNITED METHODIST CHURCH IN SPIRIT LAKE. VISITATION WILL BE HELD MONDAY FROM 5:00P.M. UNTIL 7:00P.M. AT THE SCHUCHERT-LENTZ... View Obituary & Service Information

The family of Stan Thomsen created this Life Tributes page to make it easy to share your memories.

Send flowers to the Thomsen family.