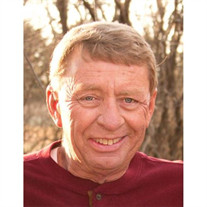 Steven L. Wallace, age 57, of Spirit Lake, passed away Friday, January 23, 2015, at his home in Spirit Lake. He was born on February 3, 1957, in Spirit Lake, to Leonard and Melba (Hilliard) Wallace. Steve graduated from Spirit Lake High School in 1975. He was united in marriage to Judy Gerstandt on May 7, 1978, in Spirit Lake. Steve worked for Wedeking Construction for many years and helped his uncle, Dean Wallace farm. In 1992, he continued Dean's legacy and has been proud to operate the Wallace Family Farm since. Steve was a member of the Dickinson County Cattlemen, Dickinson County Pork Producers, Dickinson County Snohawks and the Spirit Lake United Methodist Church. Steve served on many ag related boards and enjoyed volunteering his time to the community. Steve was a family man, he thoroughly enjoyed entertaining for any holiday and occasion. He loved meat and potatoes for every meal and he never met a stranger. He enjoyed spending his spare time with his grandchildren, enjoying his "hot rods", drinking pepsi, watching NASCAR and collecting anything with a motor! Steve is survived by his two children, Jarrod Wallace, and his wife, Cari of Harris, and Malia Wallace of Omaha, Nebraska; sister, Bonnie Gross of Spirit Lake; four brothers, Merle Wallace, and his wife, Bonnie of Spirit Lake, Jerald "Jerry" Wallace, and his wife, Elaine of Spirit Lake, Keith Wallace of Ft. Dodge, and Mike Wallace of Spirit Lake; and three grandchildren, Allison, Tyler and Aubree Wallace. He was preceded in death by his parents; his wife, Judy; sister-in-law, Cindy Wallace; and brother-in-law, Daryl Gross. A memorial service will be held at 10:30A.M. Monday, February 2, 2015, at the United Methodist Church in Spirit Lake. A memorial visitation will be held Sunday, February 1, 2015, from 2:00P.M. until 4:00P.M. at the Schuchert-Lentz Funeral Home. Burial will be at Lakeview Cemetery. In lieu of flowers, memorials may be given in Steve's name. The Schuchert-Lentz Funeral Home is in charge of the arrangements.

The family of Steve Wallace created this Life Tributes page to make it easy to share your memories.

Send flowers to the Wallace family.