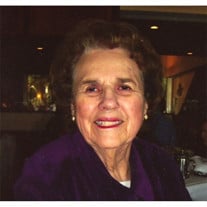 Funeral services for 86 year old Syrena Whitfield of Spirit Lake, will be held at 11:00 A.M. on Tuesday, October 13, 2015, at the United Methodist Church in Spirit Lake. Visitation will be held from 5:00-7:00 P.M., on Monday, October 12, 2015, at the Schuchert-Lentz Funeral Home in Spirit Lake. Burial will be at Lake View Gardens Cemetery in Spirit Lake. Memorials may be given in Syrena's name to the Okoboji Summer Theatre (P.O. Box 341, Spirit Lake, Iowa, 51360) or the Okoboji Yacht Club Sailing School (P.O. Box 544, Milford, Iowa, 51351.) Syrena G. Whitfield, 86, passed away peacefully on October 8, 2015, at Lakes Regional Hospital in Spirit Lake, Iowa. She was a beloved wife, mother, grandmother, and great-grandmother. Syrena was born to Robert and Zona Kinneman on January 17, 1929, in Evansville, Indiana. Her father's employment at Standard Oil Company involved the family moving four times before settling down in Des Moines, Iowa when Syrena was in high school. Syrena went on to be Roosevelt High School girls golf team captain, Des Moines high school girls golf city champion, and meet the love of her life, Harley A. Whitfield, at the First United Methodist Church youth group in Des Moines. Syrena graduated from Roosevelt High School in 1947. She received her Associate of Arts Degree in 1949 from Stephens College in Columbia, Missouri and graduated from the University of Iowa in 1951 with a B.A. Degree in Political Science. She married Harley on June 24, 1951, and they made their home in the Des Moines area for most of their married life. While Harley practiced law at the Whitfield & Eddy law firm, Syrena was caretaker of the home providing constant love and support to their four children. She also was a member of the PEO in Des Moines for several years. In 1995, Harley retired and they moved permanently to their home in Spirit Lake, Iowa. They were also fortunate to spend many winters in Florida. They celebrated their 64th wedding anniversary in June of this year. Syrena and Harley enjoyed many wonderful years at Okoboji with family and friends. Syrena took pleasure in the Okoboji Summer Theatre, spending over 50 years attending shows and serving on the board. She and Harley were also active members of the Okoboji Yacht Club for many years. Syrena will be remembered most for her beautiful smile, passion for current events, steady encouragement, and devotion to family. She is survived by her husband, Harley; daughter, Melanie (Dr. Steven) Carlson of Spirit Lake, Iowa; son, Robert Whitfield of Urbandale, Iowa; son, Harley Whitfield, Jr. of West Des Moines, Iowa; daughter, Ann (Dan) Frink of Spencer, Iowa; 11 grandchildren; and 8 great-grandchildren. The family would like to thank Dr. Thomas Kalkhoff and the staff at Lakes Family Practice, Lakes Regional Home Healthcare, Home Instead Senior Care, and Carol Solvik for their loving care and compassion of Syrena and her family.

The family of Syrena Whitfield created this Life Tributes page to make it easy to share your memories.

Send flowers to the Whitfield family.