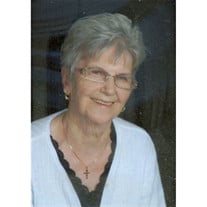 Thelma B. Madsen, age 84, of Okoboji, passed away Saturday, October 27, 2012, at St. Lukes Hospital in Kansas City, Missouri. She was born on July 25, 1928, in Sioux Center, Iowa, to James and Jennie (Boone) Brommer. Thelma graduated from Sheldon High School in 1945. She was united in marriage to Garth Madsen on July 22, 1946, in Sioux Falls, South Dakota. Garth passed away on November 1, 2005. Thelma worked for Northwestern Bell for many years as a facility maintenance manager, managing all of Southwest Iowa, before retiring in 1986. She was a member of the Okoboji Women=s Club and First Lutheran Church in West Okoboji. Thelma enjoyed spending her spare time gardening, quilting, traveling and her coffee groups. She truly loved her time with her family! Thelma is survived by her daughter, Jewel Allers, and her husband, Ben, of Kansas City, Missouri; two sons, Lyle Madsen, and his wife, Nita, of Anchorage, Alaska, and Rex Madsen, and his wife, Bev, of Bedford, Texas; grandchildren, Justin, Ryan (Paula), Kelly (Chad), Aaron (Traci), Zach (May), Reid (Ally), Kevin (Peggy), Ryan, Morgan (Tracy) and Jennifer (Michael); fifteen great-grandchildren; two brothers, Don Brommer, and his wife, Anne, of Sioux Center, and Jim Brommer, and his wife, Penny, of Bend, Oregon; two step-sisters, Lois Ford of Mesa, Arizona, and Angie Elgersma of Sanborn; a step-brother, Al Heemstra of Hospers. She was preceded by her parents; daughter, Roxi Baerenwald; brother, Les Brommer; and step-father, Henry Heemstra. A memorial service will be held at 11:00A.M. Saturday, November 3, 2012, at First Lutheran Church in West Okoboji. Visitation will be held Friday, from 4:00P.M. until 6:00P.M. at the Schuchert Funeral Home. Burial will be at Lakeview Gardens Cemetery. The Schuchert Funeral Home is in charge of the arrangements.

The family of Thelma B. Madsen created this Life Tributes page to make it easy to share your memories.

Thelma B. Madsen, age 84, of Okoboji, passed away Saturday, October...

Send flowers to the Madsen family.