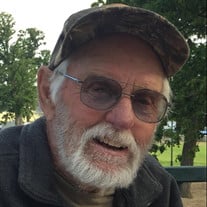 Thomas Lee Christensen, 82, of Spirit Lake, IA passed away at his home on Friday, October 25, 2019. Memorial services will be held at 10:30 a.m. Saturday, November 23, 2019 at the Schuchert-Lentz Funeral Home in Spirit Lake, IA. Military funeral honors will be conducted by the American Legion Timpe Post#23 and John W. Kidd VFW Post #4514 of Spirit Lake at the funeral home. Thomas was born, raised, and lived out his final days on the shores of Lake Okoboji. Thomas was born on April 6, 1937 in Arnolds Park to Thomas and Esther (Glover) Christensen. He graduated from Spirit Lake High School in 1955. After graduation, he served his country in the US Army, stationed in Germany. After returning home, he spent his career as a carpenter, mason, and contractor serving the lakes area. In his free time, Thomas enjoyed hunting, fishing, and most of all “lake life”. He was a creative man, a storyteller, and had a deep respect for the natural world. He is survived by his 4 children, Tory (Carrie) Christensen of St. Paul, MN; Timothy Christensen of Albert Lea, MN; Marlene Skeete of Nuremberg, Germany; and Barbara Garcia of Miami, FL; Step children Kirk Nelson, Jackie Armstrong and Dawn Erickson; grandchildren Cash Thomas, Anna Marie, Tiffany and Christopher; sister Judy Crosby of Arkansas and Jane Brown of Wisconsin. He was preceded in death by his parents and his sister Dorothy. Memorials may be made in Thomas’s name to the Okoboji Protective Association and directed to the Christensen Family.

The family of Thomas Lee Christensen created this Life Tributes page to make it easy to share your memories.

Thomas Lee Christensen, 82, of Spirit Lake, IA passed away at...

Send flowers to the Christensen family.