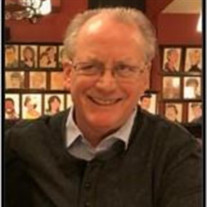 Timothy Edward Kelly September 3, 1956 – January 20, 2022 THE DAY GOD CALLED YOU HOME It broke our hearts to lose you, But you did not go alone, For part of us went with you, The day God called you home. Timothy Edward Kelly was born to Margaret (Maine) Kelly and Patrick Kelly of Estherville and Spirit Lake, Iowa along with seven siblings. He had a diverse work history throughout his life and was proud to call several places home. After graduating from City High in Iowa City, IA, he worked as a welder and carpenter in New Orleans, LA, and lived in Spirit Lake, IA for over ten years where he had numerous friends who affectionately called him “Rocky.” Tim later lived in Minneapolis, MN, Honolulu, HI, California, Florida, and New Mexico. Though a gifted cabinet maker and accomplished in many fields, he attained degrees in Information Technology (IT) from New Mexico State University and IT Management from Polk State College, FL. Tim’s work history includes long-term positions at Xerox, AT&T, Queen’s Medical Center and many nonprofit and service positions including Big Brothers/Big Sisters and Clark’s House - a ministry serving homeless Veterans. Tim’s final position in Albuquerque was as a Senior-level Engineer for IDEMIA - a law enforcement identity system for the State of New Mexico. He was also a long-time member of the Blazing Fire Church in CA. Tim’s cancer was in remission for five years before he succumbed to a four-month battle with the disease in January 2022. He is predeceased by his parents, Thomas Maine (Uncle), Sheila (sister), and Kevin and Sean (brothers). He is survived by his brother Patrick Kelly of Costa Mesa, CA, sister Theresa Kelly (Randal Hamana) of Honolulu, HI, brother Brian Kelly (Heather) and family of Springfield and his sister, Bridget Ann Kelly of Albuquerque. Tim loved outdoor physical activities including running, tennis, and hiking. His exacting yet gentle sense of humor was best experienced when he was sharing his classic films and television collection. He was a deeply kind and generous man to his final days. God was integral in Tim’s life, and it showed in his personal interactions with others as well as in his love for nature. He took a sunset walk nearly every evening, enjoyed frequent excursions to remote parts of the Southwest and enjoyed the care and feeding of local hummingbirds. Tim was a dedicated worker, loving brother, loyal friend, and devoted Christian who supported several charities world-wide. Even throughout the challenges of his illness, he remained positive, gracious, and deeply appreciative of everyone and everything around him - grateful for each day granted him yet consoled by his beliefs in reuniting with God in the hereafter. In keeping with his generous spirit, Tim donated his body to the University of New Mexico School of Medicine in hopes that his experience with Uveal Melanoma can benefit the lives of others. It was a gift to have known and loved Tim and our love for him will remain in our hearts forever.

Timothy Edward Kelly September 3, 1956 &#8211; January 20, 2022 THE DAY GOD CALLED YOU HOME It broke our hearts to lose you, But you did not go alone, For part of us went with you, The day God called you home. Timothy Edward Kelly was born... View Obituary & Service Information

The family of Timothy Edward Kelly created this Life Tributes page to make it easy to share your memories.

Send flowers to the Kelly family.