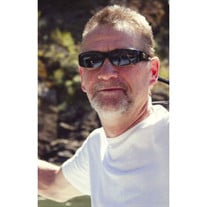 Thomas J. Mitchell, age 58, of Spirit Lake, passed away Sunday, August 9, 2015, at Avera McKennan Hospital in Sioux Falls, South Dakota. He was born on April 29, 1957, in Brookings, South Dakota, to Donald and LaVonne Mitchell. Tom served his country in the United States Air Force from 1976, until 1980. He enjoyed golfing and spending time with his family and friends. Tom can best be described as someone with a big heart and would help anyone. Tom is survived by his two children, Andy Mitchell, and his wife, Brittany of Okoboji, and Hannah Mitchell of Milford; his mother, LaVonne Mitchell of Spirit Lake; brother, Tim Mitchell, and his wife, Joni of Spirit Lake; sister, Jill Mitchell, and her husband, Mike of Port Aransas, Texas; and three grandchildren, Destiny, Aiden and Mason. He was preceded in death by his father, Don Mitchell. A memorial visitation will be held from 4:00 P.M. until 6:00 P.M. Thursday, August 13, 2015, at the Schuchert-Lentz Funeral Home. In lieu of flowers, memorials may be given in Tom's name.

The family of Tom Mitchell created this Life Tributes page to make it easy to share your memories.

Send flowers to the Mitchell family.