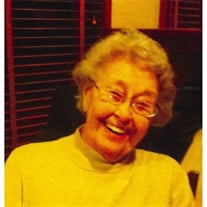 Velma Irene Olson Olney Stuart Simon's Celebration of Life will be held at 11:30A.M., Saturday, May 3, 2014, at St. Alban's Episcopal Church in Spirit Lake. The Schuchert Funeral Home is in charge of the arrangements. Velma Olney Simon peacefully passed away surrounded by loved ones on Nov 3, 2013, in her home. Born on December 19, 1922, in Estherville, IA, Vel was the second child of Raymond and Josephine Olson of rural Dolliver, Iowa. Raised on a dairy farm, Vel was active in Dolliver High School sports and was her class salutatorian, before attending Kaylor Nursing School in Rochester, Minnesota. With graduation, she entered the Army Nursing Corps as a Second Lieutenant and was stationed in Kansas, Hawaii, Leyte, the Philippines and Japan during and at the close of World War II. In Japan, she met her future husband and father of her four children, Gregory Olney of Downey, California. She spent the next 25 years as an Army Officer's spouse, deeply involved in coordinating spousal support systems, nursing, volunteerism and raising her children as they traveled from military base to military base. After over 26 years service, including participation in World War II, the Korean War, the Vietnam Conflict and numerous other brushfires around the world, the "Colonel" retired to farming in 1969, where he was tragically killed in a farm accident near Dolliver in 1973. Vel and daughter, Sue moved to Estherville, where she resumed her nursing career as office nurse for Dr. Montgomery. From 1982, until his death in 2002, Vel was married to Paul Stuart of Spirit Lake, and they lived in Methodist Camp, Spirit Lake and St. Petersburg, Fl. During their time together they travelled widely, played tennis, golfed often and entertained graciously. In 2005, she married a childhood sweetheart, Robert Simon of Dolliver. They basked in new-found youth, a joy of travel and the art of fine conversation. A cottage named "Auntie I" in Monarch Cove, Spirit Lake, was their happy home until their move into Keelson Harbor. Vel was survived by her husband, Robert; big brother, Ronald Olson and his wife, Madge Olson of Spirit Lake; and by her four cherished children, Greg Olney and his wife, Jan of St Petersburg, Fl, Donna Passmore and her husband, Ace (John) of Sugarland, TX, Ron Olney and his bride, Chris of Eden Prairie, MN, and Sue Olney Beck of St Petersburg, FL. She is also survived by 5 step children, Greg Simon of Estherville and girlfriend, Reggie Kelly of Aurelia, IA, Robert and his wife, Bonnie Simon of Dolliver, IA; Paula Stuart and husband, Phil of Washington State, Annie Stuart and her wife, Leslie of California, and Mike Stuart and wife, Irina of Washington State; 12 grandchildren and 10 great-grandchildren. She is also survived by her loved Phyllis Weston of Tampa, FL; and Thom Beck of Richland Center, WI. Vel was preceded in death by her parents; two husbands; and one grandchild, Phillip Olney. She was followed in death by her husband, Robert Simon, who passed away two weeks after Vel. Vel's remains were cremated and interred at Fort Snelling National Cemetery in Minneapolis with her first husband Greg, and in her family plot in Palestine Cemetery outside of Dolliver, Iowa. She felt her life was blessed with great love, loud laughter and deep meaning. Her mantra of "No Hill for a Stepper", her warm hugs, her sage advice and her beautiful smile touched many and will be sorely missed. What a ride, Vel. Thank you.

The family of Vel Simon created this Life Tributes page to make it easy to share your memories.

Send flowers to the Simon family.