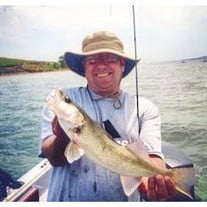 A funeral Mass for 71 year old Vern Scott of Spirit Lake, will be held at 10:30 A.M. Saturday, April 9, 2016, at St. Mary's Catholic Church in Spirit Lake. Visitation will be held Friday, April 8, 2016, from 5:00 P.M. until 7:00 P.M. with a Vigil for the Deceased at 7:00 P.M. at the Schuchert-Lentz Funeral Home. Burial will be at St. Patrick's Cemetery in Estherville. Vern Lee Scott, age 71, of Spirit Lake, passed away on Wednesday, April 6, 2016, at Lakes Regional Healthcare in Spirit Lake. He was born on May 5, 1944, in Estherville, Iowa, to Clarence and Gertrude (Fisher) Scott. Vern was united in marriage to Tish Higgins on July 16, 1966, in Ceylon, Minnesota. Vern was employed many years as a truck driver, before going to work for Stylecraft, until he retired in 2006. During his retirement, he worked part-time as a custodian and performing maintenance at the YMCA. Vern was a member of St. Mary's Catholic Church. He enjoyed spending his spare time fishing, traveling, watching NASCAR and the Green Bay Packers, having coffee with his friends, collecting coins, stamps and antiques and was an avid seller of antiques and collectibles with his brother, Bill. Vern was an amazing father and grandfather as his four grandchildren were the joy of his life. He loved living next to Carousel Preschool and Day Care, as he loved all children. Vern is survived by his wife, Tish Scott of Spirit Lake; children, Troy Scott, and his wife, Shelley, and their children, Alexa and Willow of Concord, North Carolina, and Kay Ward, and her husband, Garret, and their children, Colton and Logan of Jackson, Minnesota; brother, Bill Scott of Estherville; sisters, Mary Haugland of Spirit Lake, Shirley Crosby, and her husband, Paul of Spirit Lake, and Kay Schumacher, and her husband, Harlan of Milford; and many nieces and nephews. He was preceded in death by his parents, Clarence and Gertrude.

The family of Vern Scott created this Life Tributes page to make it easy to share your memories.

A funeral Mass for 71 year old Vern Scott of Spirit Lake, will...

Send flowers to the Scott family.