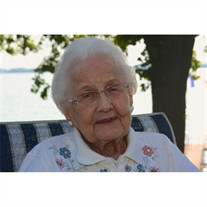 Verna N. Bright, age 99, of Spirit Lake, passed away Sunday, August 25, 2013, at Hilltop Care Center in Spirit Lake. She was born on February 3, 1914, in Bock, Minnesota, to Erick and Emma (Danger) Colin. Verna graduated from Nora Springs High School. She was united in marriage to Donald D. Bright on August 1, 1936, in Rush Pointe, Minnesota. Donald passed away on December 14, 1984. Verna and Don owned and operated Bright Drug in Nora Springs until 1950. They lived in Nora Springs until 1961, when they moved to Boone until Don retired in 1979. They moved to Spirit Lake in 1979, where they lived on East Lake Okoboji. Verna was a member of St. Luke's Lutheran Church in Nora Springs, Iowa Augustana Lutheran Church in Boone, Grace Lutheran Church in Spirit Lake, and the Eastern Star. She enjoyed spending her spare time reading, cooking, playing cards, especially bridge, quilting, crossword puzzles and traveling, spending winters in Arizona, Texas and California. Verna is survived by her three children, Carolyn Ramsay, and her husband, Richard of Spirit Lake, Kathie Paulson, and her husband, Stephen of Danville, California, and Brian Bright, and his wife, Beth of Okoboji; two sisters, Glenys Lindstrom and Connie Ziebell; six grandchildren; five great-grandchildren; and many nieces and nephews. She was preceded in death by her parents; her husband; two brothers; and one sister. A funeral service will be held at 4:00P.M. Wednesday, August 28, 2013, at the Schuchert Funeral Home. Visitation will be held Wednesday, from 4:30P.M. until 6:00P.M. at the Schuchert Funeral Home. Burial will be at the Park Cemetery in Nora Springs, Iowa, on Thursday, at 11:00A.M. In lieu of flowers, memorials may be given to the Verna Bright Memorial Fund and sent to Schuchert Funeral Home, P.O. Box 272, Spirit Lake, Iowa, 51360. The Schuchert Funeral Home is in charge of the arrangements.

The family of Verna Bright created this Life Tributes page to make it easy to share your memories.

Send flowers to the Bright family.