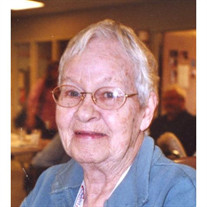 Virginia Louise Griffiths, age 89, of Spirit Lake, passed away Friday, May 30, 2014, at Hilltop Care Center in Spirit Lake. She was born on February 16, 1925, in Chariton, Iowa, to Harley and Cora (Offenhauser) Peterson. Virginia graduated from Chariton High School in 1943. She worked as a secretary for the Spencer Jr. High School for many years, before moving to California. In the mid 80's, Virginia moved to Arnolds Park and managed Benson Cottages until she retired. She enjoyed spending her spare time reading and working on crafts. Virginia is survived by her three children, Cathryn Burke, and her husband, Michael of Dublin, Texas, Teri Holladay, and her husband, Don of Spirit Lake, and Scott Griffiths, and his wife, Lael of Humble, Texas; nine grandchildren; three great-grandchildren; many nieces and nephews; and her family at Hilltop Care Center. She is preceded in death by her parents; three brothers; and three sisters. A graveside service will be held at 1:00P.M. Tuesday, June 3, 2014, at Graceland Cemetery in Knoxville, Iowa. The Schuchert Funeral Home is in charge of the arrangements.

The family of Virginia Griffiths created this Life Tributes page to make it easy to share your memories.

Send flowers to the Griffiths family.