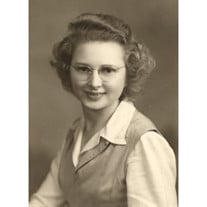 Wilma M. Roberts, age 92, of Spirit Lake, passed away November 7, 2013, at the Milford Nursing Home. She was born September 29, 1921 in Fulton, SD, to Charles and Ida (Witt) Franks. She was a fast runner and won several ribbons in track. She always said she was the fastest runner in Hanson County, SD. Wilma graduated from Fulton High School, Fulton, SD, in 1939. She moved to Jackson, MN, and later to Spencer, IA, where she worked at Farmer's Bank. Wilma was married to Kenneth Roberts May 20, 1946, in Montevideo, MN. They moved to the Great Lakes Area in 1950. Wilma was a member of the Ground Observer Corps from 1956-1959. She always remembered her call sign Kilo Pappa 52 Black. Wilma started working at the State Bank in Spirit Lake, as a head teller in 1965, when the bank first started in business. She was elected as an Assistant Cashier in 1970, and elected as a Cashier in 1973. Wilma retired from the State Bank December 31, 1986, after 21 years. She was a member of the Immanuel Lutheran Church in Spirit Lake. Wilma enjoyed travelling, playing cards and word puzzles. In her younger years she enjoyed dancing at the Woodcliff Ballroom and Hamm's in Spencer. She mentioned it often in her later years. Wilma is survived by her children Timothy (Dianne) Roberts of Spirit Lake, and Sharon (Les) Marousek of Okoboji; sister, Mary Ann (George) O'Neill of Fulton, SD; sister-in-law, Audrey Franks of Mitchell, SD; granddaughter, Susan (Mike) Elser; great-grandchildren, Stefan (Claire) Elser, Sean Elser, Jesse Elser and Caitlin Elser; and many nieces and nephews. Preceded in death by her parents; her husband of 52 years, Ken; brothers, Harold, Orville and Willard; and sisters, Erma and Ruth. A funeral service will be held at 10:00A.M. Saturday, Novemeber 9, 2013, at the Schuchert Funeral Home. Burial will be at the Okoboji Cemetery. The Schuchert Funeral Home is in charge of the arrangements.

Wilma M. Roberts, age 92, of Spirit Lake, passed away November 7, 2013, at the Milford Nursing Home. She was born September 29, 1921 in Fulton, SD, to Charles and Ida (Witt) Franks. She was a fast runner and won several ribbons in track. She... View Obituary & Service Information

The family of Wilma Roberts created this Life Tributes page to make it easy to share your memories.

Send flowers to the Roberts family.