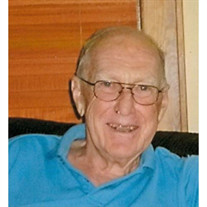 Winton Fahrenkrog, age 78, of Spirit Lake, passed away Thursday, August 2, 2012, at Avera Heart Hospital in Sioux Falls, South Dakota. He was born on March 5, 1934, in Hartley, Iowa, to Emil and Lillian (Peters) Fahrenkrog. Winton graduated from Hartley High School in 1952, and enlisted to serve his country in the United States Army, from 1952, until 1954. He was united in marriage to Joyce Tercey on June 1, 1957, in Spencer. Winton worked his way up in the grocery business, before he owned and operated Broadway Supermarket in Slayton, Minnesota. In 1972, he sold the grocery store and went to work for Sather Candy Company as the Director of Procurement. He was honored by the National Candy Association for a career achievement award, one of two ever given. Winton enjoyed spending his spare time golfing, sailing, traveling and loved to play cards. He was a member of St. Mary's Catholic Church, Kiwanis and the Jaycees, but most of all spending time with his family. Winton is survived by his wife, Joyce Fahrenkrog of Spirit Lake; a daughter, Gail Huckins of Burlington; two sons, Steven Fahrenkrog, and his wife, Kim, of Salt Lake City, Utah, and Jeff Fahrenkrog, and his wife, Laurie, of Urbandale; six grandchildren, Bryan, Kellie, Tyler, Jared, Jovi and Justin; and one great-grandchild, Zakiah. He was preceded in death by his parents; a daughter, Lynn Engle; and three sisters, Marge, Dorothy and Evelyn. A funeral Mass will be held at 10:30A.M. Monday, August 6, 2012, at St. Mary's Catholic Church in Spirit Lake. Visitation will be held Sunday, from 7:00P.M. until 8:00P.M. at the Schuchert Funeral Home. The Schuchert Funeral Home is in charge of the arrangements.

The family of Winton Fahrenkrog created this Life Tributes page to make it easy to share your memories.

Send flowers to the Fahrenkrog family.